Intergen provide resources, support and training to intergenerational ministries to equip the church to engage people of all ages in faith formation.

From the VSSU & VCCE to Intergen

Intergen (formerly the Victorian Council of Christian Education) was established by passionate lay people in 1871 who championed the support and resourcing of the early bush missions and urban Sunday schools of Victoria.  Before there were clergy or buildings, these little Sunday schools, meeting around kitchen tables or in tents, were the seeds of church planting, led by lay, volunteers – often women. In many ways they were early versions of what we would now think of as playgroups and Messy church.

The VSSU – Victorian Sunday Schools Union, as it was called in those days, organized funding, shipment and distribution of curriculum resources and training. This movement grew and developed as a provider of Christian education, but also with a vibrant social justice edge as well, as it gathered many children who were impoverished in both urban slums and rural margins of Victoria with great physical and financial need.

In 2015 the VCCE launched into a new phase, renewing the vision from 150 years ago, and adapting it to twenty first century mission. Still committed to the work of supporting and resourcing those who work in children and families ministry and mission, in addition to our partnerships with council denominations and organisations, the VCCE has entered partnerships with the Christian Playgroup Network, Messy Church (UK), Scripture Union Victoria and CBM Australia.

A decision was made in 2018 to rename the VCCE to Intergen. This name change reflects a growing desire to promote and support intergenerational faith formation and communities. Continuing in the spirit of our history of training and resourcing, Intergen is engaging a fresh strategy of establishing Communities of Practice in which lay and ordained practitioners are provided with a context for ministry formation and support. Our Intergen Communities of Practice operate in various places around Melbourne and beyond. 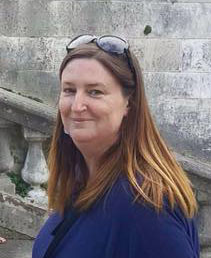 Stacey Wilson is the non-artistic but still creative half of the Intergen team. She is deeply committed to inclusion in all its many forms. Right now she is probably sitting out on the deck of her house, missing her daily trip to the local cafe, worrying about her mum and enjoying having time to spend with her family. At some stage she will also finish her uni assignment.

Beck is the arty, creative, nerdy half of the creative team at Intergen. She’s  deeply unsettled by the status quo. She’s committed to finding ways to make space for people to explore faith in creative ways. She’s currently socially distancing in a house with her three kids, two dogs, and many, many house plants.